The duel at the Santiago Bernabeu Stadium can be watched live stream at Live Koora on Wednesday 4 May 2022 at 20.00 (UK).

Man City has stepped one foot into the final after winning the first-leg duel. The rain of goals occurred in the match which was held at the Etihad Stadium last week. City edged ahead with a score of 4-3.

Mathematically, City only needs a draw to advance to the final round. However, this ambition is predicted to be difficult to achieve. Moreover, they will visit the opponent’s headquarters, the Santiago Bernabeu Stadium.

Manchester City had a positive morale boost before flying to Madrid. They are unbeaten in their last 14 away matches in all competitions (W 11 D 3).

In addition, the defense line of Pep Guardiola’s troops also proved strong when appearing at the opponent’s headquarters. Ederson managed to keep 8 clean sheets from the last 9 away games.

This cannot be separated from the pressing strategy with high blocks applied by Guardiola. Under his command this season, City was able to record a fairly low PPDA (Passes Per Defensive Actions) ratio, which was at 10.1. This value is the 3rd lowest in the English Premier League.

PPDA itself is a statistic that measures the intensity of a team’s pressing. The data is calculated from how many passes the opposing team made in the defense area of ​​a team. The smaller the PPDA score means the more intense a team is doing high pressing, and vice versa.

This strategy is likely to be maintained by Pep Guardiola in the second leg match later. While Real Madrid will most likely continue to rely on a quick counter-attack through the left side.

Of their overall attack in the UCL this season, 40 percent of them were built through the left-wing sector. Vinicius Junior who is in that position has the speed and skill that is qualified to be able to dismantle the opponent’s defense.

The dribble ratio per game of 2.7 is proof of Vinicius’ dominance in his efforts to dismantle the opponent’s defense. His contribution to creating opportunities is also quite large. In the UCL event, he became the Real Madrid player with the highest key pass score compared to other players (2.4).

Eden Hazard has been ruled out for the home side due to injury. Meanwhile, David Alaba is still doubtful of being able to strengthen Los Blancos’ central defense.

If Alaba still hasn’t recovered, the center-back position he left will be filled by Nacho Fernandez.

Kyle Walker and John Stones are still doubtful about flying to Madrid this week. However, City will welcome the return of Joao Cancelo after previously missing due to card accumulation.

Cancelo is likely to move to the right wing-back position, while the left side will be occupied by Zinchenko or Nathan Ake.

The following is the predicted line-up for the two teams:

Man City has a good record against Real Madrid in the last 5 years. Since 2017, the two teams have met 4 times, all of which have been won by The Citizens.

The last time Real Madrid was able to beat Manchester Blue was in 2016. Precisely at the second meeting of the 2015/16 UCL semifinals, Los Blancos managed to beat City 1-0 at the Santiago Bernabeu.

Results of the last 5 meetings of Real Madrid vs Manchester City: 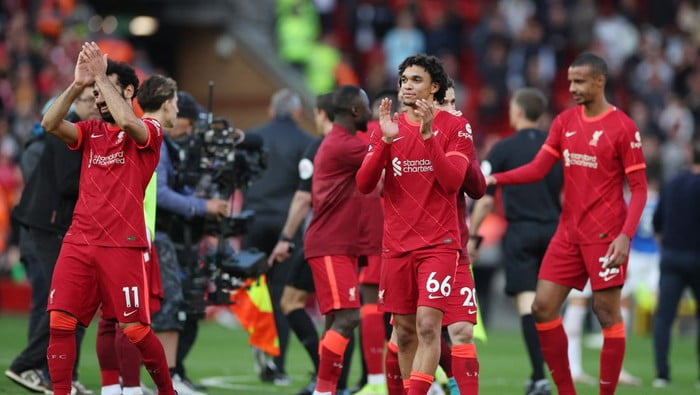 Liverpool managed to qualify for the Champions League final. The English club won 3-2 at occasional Villarreal in the semi-final second leg on Wednesday, May 4, 2022, going on to progress 5-2 on aggregate.

Villarreal, already two goals down in the first leg, started the game well. They were able to grab two goals in the first half, through Boulaye Dia in the third minute and Francis Coquelin in the 41st minute. Both goals from the Spanish team were created thanks to Etienne Capoue’s assists.
Liverpool equalized through goals from Fabinho (62) and Luis Diaz (67). Sadio Mane finally sealed the Reds’ victory with his goal (73).

Villarreal struggled to catch up, especially after in the 86th minute they had to play with 10 men. Etienne Capoue was shown a second yellow card for fouling Curtis Jones.

Both teams are evenly matched in possession of the ball. However, Liverpool beat Villarreal in terms of shots on target on target (5 to 2).

With this success, Liverpool became the first English club to reach the final of the European Cup/Champions League, FA Cup, and League Cup in the same season.

Now, Jurgen Klopp’s team is being pushed to chase a seventh Champions League title. They qualified for the final for the 10th time.

In the Champions League final, Liverpool is still waiting for the opponent. The second leg of the semi-final between Real Madrid and Manchester City will only take place on Thursday morning. Man City is already leading 4-3 in the first meeting.

Manchester City has a slight advantage, as they took a 4-3 lead in last week’s 1st leg semi-final at the Etihad stadium.

But facing Real Madrid is certainly not an easy matter, considering the team nicknamed Los Blancos is known to have frightening strength in its own cage.

So in your opinion, who will come out victorious in this match and advance to the final to face Liverpool who is already waiting there?

Watch the grand match of the semifinals 2nd leg of the champions league between Real Madrid vs Manchester City, which will take place at the Santiago Bernabeu Stadium on, Wednesday, 4 May 2022 at 20:00 (UK).

You can watch the live streaming link on Live Koora, by clicking the link below: