Download the Latest Malwarebytes 2022 – Malwarebytes is one of the software that is very often recommended to prevent and eradicate malware on Windows operating systems. Apart from being lightweight, its ability to detect malware is also good, and can be used as a complement to antivirus.

The free version of Malwarebytes does not have a real-time protection feature that serves to protect the system continuously. That’s why this version is more often used in conjunction with other antiviruses. The goal is to get rid of any malware that might have escaped antivirus surveillance.

The free version of Malwarebytes is also often used for scanning when users still doubt the security of a file even though it has been previously checked by an antivirus.

On the other hand, the paid version of Malwarebytes called Malwarebytes Premium is equipped with real-time protection so that it can be used as a replacement for an existing antivirus.

To promote the paid version, every user of the free version of Malwarebytes is given the opportunity to enjoy real-time protection and other premium features for 14 days.

After that period expires, all premium features will be discontinued. Furthermore, users can still use Malwarebytes but with more limited features. 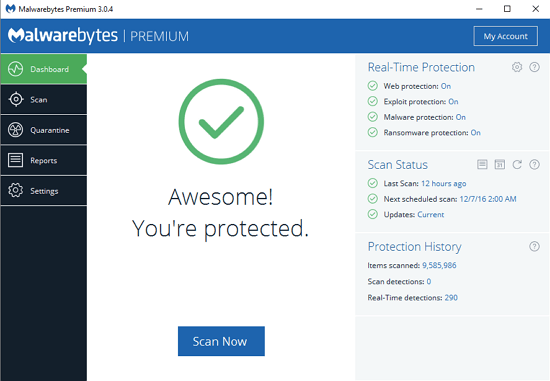 The scanning process usually demands larger resources so that it greatly affects system performance. To overcome this, Malwarebytes inserts a feature to reduce scanning priority.

This feature makes the scanning process take longer than usual, but on the positive side, users can be more comfortable in multitasking.

An anti-rootkit feature is also included in Malwarebytes but users must activate it first if they want to use it. This feature is disabled by default because it makes the scanning process take longer.

Users are advised to use it only if the computer shows symptoms of malware but the scans fail to detect anything suspicious.

No less important is the Scan within archives feature. This feature allows Malwarebytes to check files packaged in zip, rar and similar formats, but this feature is only effective for compressed files that are not protected by a password.

The next feature is related to user convenience, namely Play Mode. When users watch videos, play games or run certain software in full screen mode, this feature will automatically turn off all notification messages from Malwarebytes.

As a piece of software that plays an important role in preventing the system from being infected by malware, Malwarebytes has security features whose effectiveness cannot be doubted.

The user convenience factor did not go unnoticed. If you are looking for software that can strengthen Windows security, give Malwarebytes a try. Download the latest and free Malwarebytes via the link below :